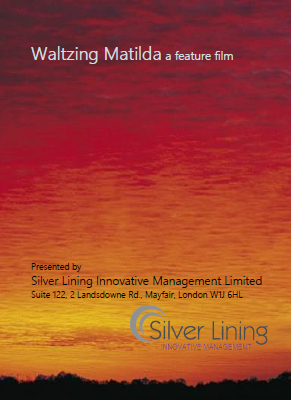 Waltzing Matilda – a powerful story of love against a nation at war with itself and set in the magnificent Australian outback – set to become a classic film of two young lovers from families at war set against the backdrop of the birth of a nation. The producers have obtained significant funding for production of a £9m film and are offering shares to £3m as part of the production budget. Investors capital is protected in part through UK government incentives provided by the Enterprise Investment Scheme. Returns for even a modest success exceed 150% ROI, and greater profits could easily exceed that. The producers have assembled a top professional team with internationally renowned director and cast. An Information Memorandum with full details of the offer is available on request from Silver Lining Innovative Management.

The Film will be directed by its co-writer, the award winning director Franc Roddam, best known for his genre-defining rock musical “Quadrophenia” creator of the best loved TV series, Auf Wiedersehen, Pet; director of the BAFTA finalist mini series, Moby Dick, and creator and owner of the worldwide sensation television series, Masterchef. Luke Bracey, star of the successful feature film “November Man” and star of the $100 million budget “Point Break” a major Warner Bros release on December 25 2015, is attached to star in Waltzing Matilda where he will be coupled with a top female lead soon to be announced. Arclight Films, one of the world’s leading international sales company and will be representing the Film at all major film markets including the Cannes Film Festival, Berlin Film Festival, American Film Market, Hong Kong Film Market, Toronto Film Festival, and others. The Producers have wide experience in the international marketplace with more than 70 film production credits and the Film is scheduled to begin production in Australia in July 2016 for release summer or autumn 2017.

Luke Bracey is one of the most exciting actors in the world. After starting on Australia’s leading prime time soap, Home and Away, the launching point for many international actors, he first gained public attention with a riveting performance in one of the biggest films of 2013, “GI Joe”. That lead to a leading role in ABC’s hit tv series Westside alongside Jennifer Beale.From there he was picked up to co-star with Pierce Brosnan in Roger Donaldsons’ “November Man” in 2014 where Alcon and Warner Bros cast him as the lead role in one of Warner Bros most anticipated movies, the $100 million remake of “Point Break” in which Luke has the starring role of Johnny Utah. “Point Break” is released on December 25 in the USA and On January 8 in the UK. The trailer has already had almost 6 million views. Waltzing Matilda is indeed fortunate to have attracted one of the major stars of 2016.

The Film be shot entirely on location in Australia, with post production in the UK as part of an official UK-Australia Co-production. The production budget is expected to be £8.8m and the Film has already attracted top level cast in Mr Luke Bracey, star of the upcoming major worldwide release, Point Break. Hubbard Casting, one of the worlds leading casting companies (based in London) is currently engaged in selecting the right female co-star to match Bracey and an announcement is expected shortly.